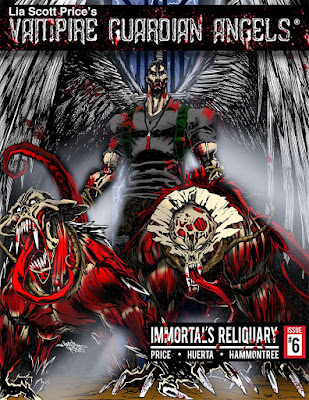 The ancient Estonian Prince Jeromos has escaped to Sweden, his homeland, with the Author, Ms. Price, as his hostage. It is revealed that he has the horribly burned and injured Gabriel, and is attempting to heal him.

Janos has also ordered Jeromos to take over the monastery with his "holy" army provided by the Church and to find a cure for both the plague and any injured Vampire Guardian Angels who bypassed the portal in an attempt to either get to Heaven or Earth,  and who were horribly burned in the process. Jeromos forms the "Immortal's Reliquary", where he uses holy relics,  "holy blood from martyred saints" in "vials mixed with blood and gold" to form a healing potion he feeds to the injured Vampire Guardian Angels. The vial mixture heals Vampire Guardian Angels because ancient relics were kept in gold and becomes a supernatural preserving agent. It is also mixed with some of Ms. Price's own blood. He keeps the injured angels in glass coffins,  “reliquaries” made of gold and infused with holy relics that “activate” healing.

But secretly, Jeromos is saving Gabriel, considered the most vicious and powerful of all the Vampire Guardian Angels, so he can use him to help him take over Janos's reign. He knows Janos is  unaware that his own army is planning to join Jeromos. And he knows Gabriel will be loyal to him for saving him. However, an injured and burned Cameron surprises Jeromos, cutting off one of his wings and causing Jeromos to partially burn and become disfigured. Jeromos manages to save himself by drinking blood from a reliquary. Enraged, Jeromos takes Cameron hostage, and he imprisons him alongside what he calls his new, animal-like, genetically altered breed of rabid Vampire Guardian Angels, ones that Jeromos has been experimenting with, called the "Angelorumrabidi".

Frustrated and resenting his role of "nurse" to the Vampire Guardian Angels and depressed with his disfigurement, Jeromos becomes an alcoholic. He also wants to claim Ms. Price for himself, and make her his queen. He knows her blood is "the cure",  and one drop of her blood is powerful enough to heal them. She is extremely valuable because she is their "creator" who has awakened them and has inadvertently allowed them to finally exist in the real world by her strong belief in them. Jeromos has also discovered that Ms. Price has royal blood - something she was not aware of, and a descendant of Spanish nobility, making her an ideal queen. Combined with her noble blood and her "resurrective" powers, she is a valuable addition to his claims for the throne, as long as he "owns" her. And once he raises his army, he would have everything, and the Vampire Guardian Angels would follow him without question.  After explaining to Ms. Price why he has kidnapped her and his desire to overthrow Janos and rule, Jeromos takes some of her blood in a vial in order to heal Gabriel, and then bites Ms. Price and drinks her blood to heal himself, turning her into a vampire.

Cameron is freed by Detective Costa, who has followed and found him in Sweden, and who was informed of Jeromos's hideout by Earth Vampires who were friends of Catharina, the earth vampire who died saving Joseph from Jeromos's army. Cameron reveals that he also came to the Immortal's Reliquary to steal the saints' blood to heal himself. Cameron had  been kept busy sealing portals that were created by the dying Vampire Guardian Angels on Earth, which prevented more of the army from coming down. But it was taking a toll on Cameron, who was getting weaker ever since his descent from Heaven to save Joseph, and when Jeromos kidnapped the author, Cameron knows he has to save her since he knows why Jeromos wants her, and he had also been planning to break into Jeromos's hideout to heal himself by stealing Jeromos's reliquaries.

As Cameron and Costa look for the author, Gabriel, now loyal to Jeromos, intercepts them. Costa and Cameron are surprised to find Gabriel alive.  Before Cameron fights Gabriel,  he smears his blood on Costa's weapon, a machete, since his blood can kill evil. Costa is attacked by the two rabid Vampire Guardian Angels, the Angelorumrabidi, that Jeromos has set free and sent after them. Costa manages to kill the vampires, but is bitten. Fortunately, he has a reliquary he has taken "just in case" and he uses the blood to heal himself, as he rapidly becomes a Vampire Guardian Angel. Meanwhile, the still-fighting Cameron and Gabriel are engulfed in a mysterious light. When the light dissipates, they are entombed unconscious, but alive, in glass coffins and sealed behind a heavy door.

As a mysterious glowing figure appears before the transforming Costa, it's Joseph, having become more powerful. Holding Cameron's sword, Joseph reveals that it was Janos who had secretly sent the virus down. When Janos got into Heaven using the portals of the three original Vampire Guardian Angels,  Zeke, Anthony, and Jude who were killed by Cameron and Costa,  this gave Janos the idea to use a virus to cause more deaths of Vampire Guardian Angels on Earth so that their ascending bodies could be used as portals so he could bring down his army from Heaven. But it got out of hand, leading Janos to create the breeding program to feed the Vampire Guardian Angels on Earth. Janos saw that he was losing control of the plague so he sent Jeromos to find the cure. And Janos killed his own father, Gregory, as revenge for the death of Leah, and to create a portal for both Jeromos and Joseph to get back to Earth, but not before revealing to Joseph that Jeromos was unaware that Janos had created the virus, and that he now trusted Joseph with these revelations. However, Cameron had intercepted the plan for the army's descent when he escaped from Heaven to save Joseph and sealed the portals, since he had the power to do so. Joseph wants to get rid of Cameron so he can take over the army, since he does not consider Cameron his real father and still holds him responsible for his mother's death.

Joseph explains that he imprisoned Cameron and Gabriel since he does not have the power to kill them since he has now chosen to become evil, but he plans to sacrifice his own (step) father, Cameron, and Gabriel, in order to create a powerful portal that will finally bring down the Janos's Vampire Guardian Angel army, who he hopes will follow him based on fear even if he is not a royal, and take over Janos's reign and get rid of Jeromos as well. But although he knows he cannot kill his own kind yet,  he hopes that he can find a way to use Cameron's sword, which can kill Angels only if wielded by a good angel. He is not sure if it will work in the hands of an evil one.