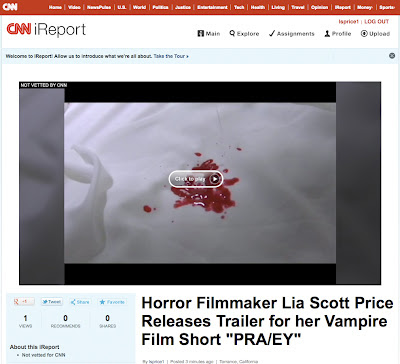 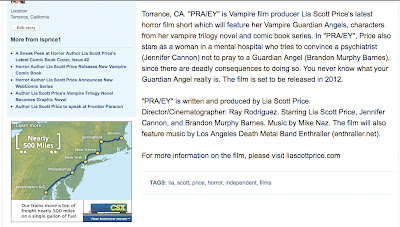 Posted by Lia Scott Price at 6:39 PM No comments:

Horror Society once again has the exclusive release to my upcoming Vampire Guardian Angels film short "PRA/EY", and the always awesome Michael DeFellipo has the exclusive first look at the trailer! Many many thanks to Michael for posting the trailer, and thank you to Mike Naz for the awesome music!

The film is based on the Vampire Guardian Angels characters from my Trilogy Novel and Comic Book Series. 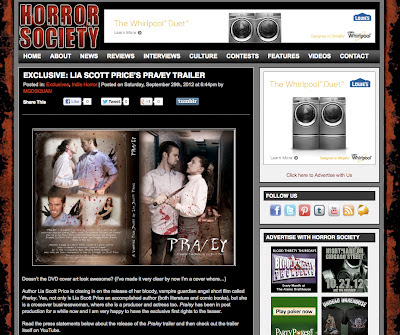 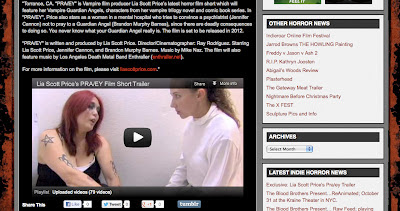 Posted by Lia Scott Price at 5:42 PM No comments: 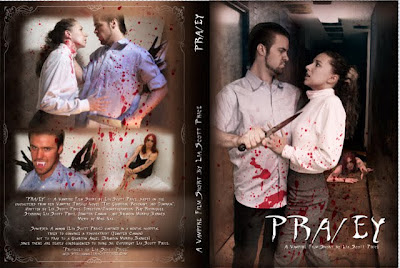 Posted by Lia Scott Price at 5:30 PM No comments: 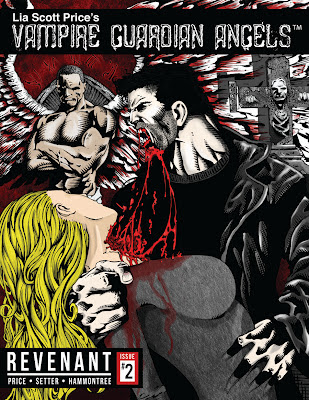 "Revenant" is the title of Issue #2, which is scheduled for an October 2012 release date.

Price has been turning her Vampire Trilogy Novel "The Guardian, Revenant, and Dominion" into films, and lately,  into a comic book series, her latest project. "It's kind of like a storyboard for my future Vampire action film project." says Price.

For fans who have been following the series,  this is Price's sequel to Issue #1 "The Guardian", which features Guardian Angels who have become vicious vampires, killing people who summon them for help. "Revenant" will  also provide more insight into the character's origins.  In addition, Los Angeles Death Metal Band Enthraller (www.enthraller.net) will make its second comic book cameo....as vampires.

For more info on the comic book series, visit www.liascottprice.com
Posted by Lia Scott Price at 7:39 PM No comments: 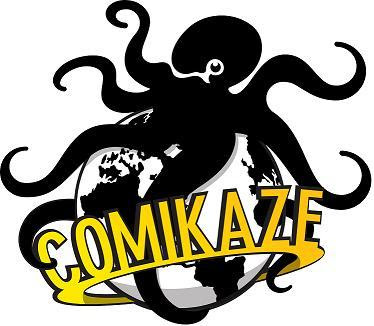 My artists Andrew Setter, Chad Hammontree, and I will be signing comic books! (Limited amount of comic books available, while supplies last). Come meet us!

I will also have some free autographed photos and stickers! (While supplies last)

The event will be videotaped.

Get your tickets now at comikazeexpo.com

Posted by Lia Scott Price at 2:25 PM No comments: 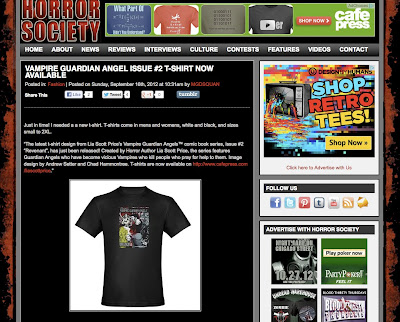 Posted by Lia Scott Price at 11:43 AM No comments: 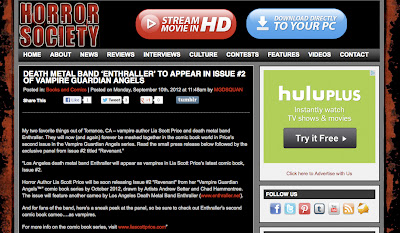 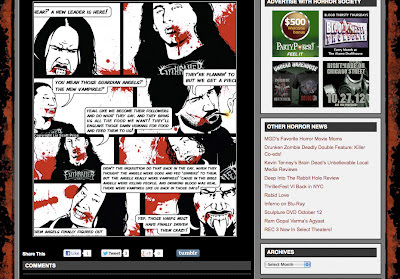 My favorite Horror Writer, the always awesome Michael DeFellipo, and my favorite Horror site, Horror Society, have been so supportive of my work, and I especially thank them for supporting my fav death metal band Enthraller! Horror Society has the exclusive on a panel of the band members in Issue #2 of my upcoming comic book as......vampires, drawn by Andrew Setter, with colorist Chad Hammontree, and they made the band look bloody bloody good! You gotta see this! Death Metal Band Enthraller to appear in Issue 2 of Vampire Guardian Angels/
Posted by Lia Scott Price at 6:00 PM No comments:

9 months have passed. On earth, there is a mysterious virus. Male humans lie  bleeding in hospitals from a combination of a  deadly form of necrotizing flesh eating bacteria that also causes the victim to bleed uncontrollably, attracting earth vampires. They feed on the dying victim, but end up dying themselves. The earth vampires dissolve into pools of blood.

Meanwhile, word of this virus spreads up in Heaven, where  Jeromos tries to inform Janos of the plague on Earth. But Janos is furious.  Leah  killed herself and their unborn child. Jeromos asks Janos what they should do about the plague, and Janos decides to make Jeromos his new heir, because he is a Royal. Janos also explains the secret of how the portal works, that any Angel can open the portal but it requires the death of Angels to provide the safe passage through the astral plane of good and evil through a tunnel of celestial light,  and that being the "chosen one" and that only Royals could rule was a political myth and ploy used to become leader of the Vampire Guardian Angels. Janos also reveals how he got into Heaven: After he escaped from the psychiatric ward, he hid in a New York Cathedral. There, he had found the three Vampire Guardian Angels, Zeke, Anthony, and Jude, who Cameron had prevented from ascending, dying, after they wandered around  aimlessly, hiding in churches. Because he still had some traces of good in him, Janos killed the three angels, and ascended into Heaven using the portal of light. That had been his plan all along, sent to him in visions: to sacrifice the three Vampire Guardian Angels so he could rule in Heaven and fulfill the prophecy.

Gregory, still on Earth after being wounded by Detectives Graham and Costa, hears of the news of Leah's death from angel statues in a church and, enraged, vows revenge for Leah's death. He blames Janos. He also hears that, left without an heir, Janos chose Jeromos as his alternate heir, because he was a Royal. Gregory decides he wants to unseat Janos and take over leadership, since he still considers Janos a weak ruler,  and he has to find a way back to Heaven since Cameron destroyed the portal. The angel statues tell him that Cameron's adopted son, Joseph, is still on Earth. Gregory then decides Joseph is his key to returning to heaven. He plans to kill Joseph and use his ascending spirit to get back into heaven, just like the earth vampire did with Gabriel.

Still on Earth, Joseph also hears the news of Janos's choice of heir from angel statues while visiting his mother's grave, and is overcome  with anger. He feels he should take over and should have been mentored by Janos because he feels he is more powerful because of his power of light, but knows he is too young and inexperienced. The angel statues tell him that he is known as the "Angel Killer", but that he must also control his temper and desires for revenge if he wants to rule.

Gregory finds the angry and vengeful Joseph in the cemetery and convinces him to unseat Janos from power. Joseph tells Gregory that he also wants to destroy Cameron for killing his mother and for turning him into a vampire, but he also wants the power that Janos has.

However, while they conspire on Earth, Gregory sees a young Earth Vampire wandering through the cemetery. The human appears weak and frothing bloody saliva at the mouth. begging for help and crying out that he is sick and for his someone to save him. Gregory, seeing opportunity for a meal, kills the young man and  feeds off  him, since Vampire Guardian Angels can feed off other Vampires too. Joseph just watches. But Gregory suddenly drops the man and starts dissolving. After Gregory dies, turning into a pool of blood, Joseph spreads his wings and follows the ball of light up back to heaven. He did what Gabriel did, hitching a ride to heaven like the earth vampire did. 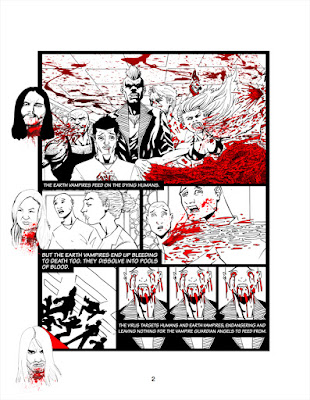 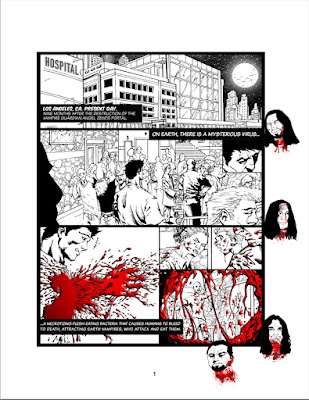 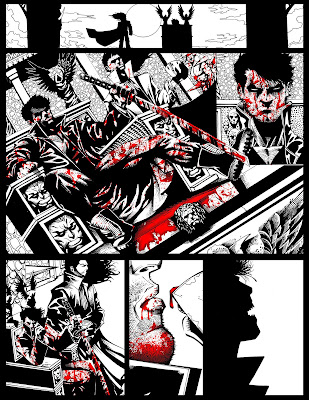 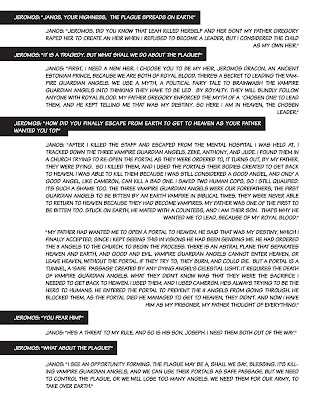 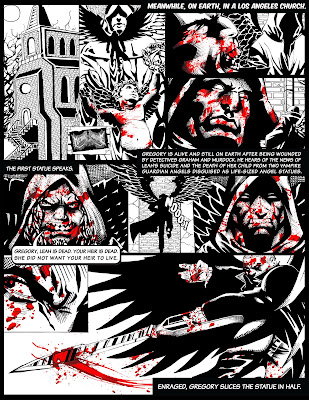 Do you want a sneak peek at a page of the next comic book issue? Do ya? Do ya? Well then, head on over to the always incredible Horror Society, as the always awesome and talented writer Michael DeFellipo has the exclusive look at the image! Thank you to my BFF Michael, and to Horror Society, for all your support! My vampires thank you! 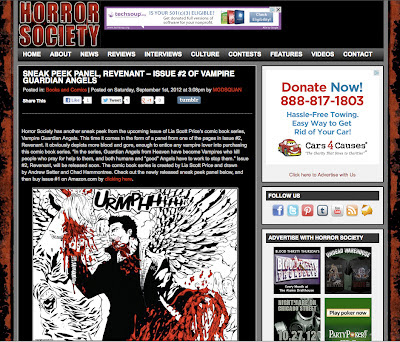 Posted by Lia Scott Price at 3:13 PM No comments: