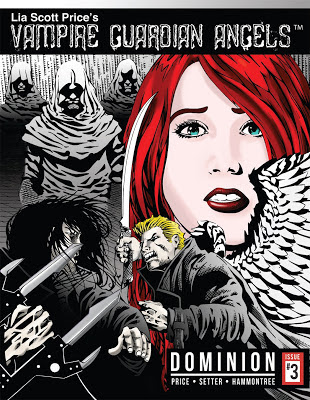 Torrance, CA. In a “Special Edition”, horror author Lia Scott Price appears as a character in, and on the cover of, the third issue “Dominion” from her comic book series “Vampire Guardian AngelsTM”. She plays an “Author” character responsible for “accidentally bringing her supernatural vampire characters to life”, and, in this gory and bloody action-filled issue, she has to stop her own characters from taking over humans. The comic book features psychopathic, weapon-wielding guardian angels who have become serial-killing vampires. They can only target people who summon guardian angels for help.

The series is the comic book version of Price’s published vampire trilogy novel “The Guardian, Revenant, and Dominion”. Published through createspace.com, the comic book series is written and created by Lia Scott Price, and drawn by artists Andrew Setter and Chad Hammontree.

For the comic book series, visit www.liascottprice.com
Posted by Lia Scott Price at 2:57 PM No comments: 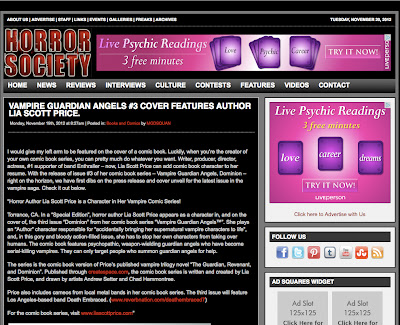 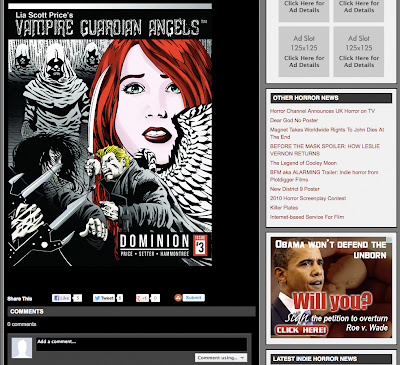 Posted by Lia Scott Price at 2:51 PM No comments: 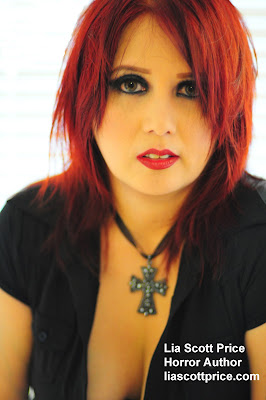 This post references and contains quotes from various published articles written by bloggers and journalists. Please click on the links to see the full articles to whom the quotes are credited to. If quoting anything in this biography, please give credit to the original writer on the article. Thank you.

Special thanks to all the writers of these articles! (See credits listed after the bio)


Known For:
Unique New Characters in the Vampire Genre

(Please click on the link to see the full article and the writers that the quotes are credited to.)

Price is the author of the vampire trilogy novel, The Guardian, Revenant, and Dominion and the creator and writer of the independent comic book series Vampire Guardian AngelsTM. She gives a fresh new twist to the Vampire genre by creating a new, original, and unique breed of serial-killing vampire and "has brought a fresh concept to the literary world". Her comic books have been "recommended for their 'originality'”. In her works, she turned Guardian Angels into a brutal, bloody, disturbing, vicious and seemingly invincible Vampire.  Price's Vampire Guardian AngelsTM Comic Book Series has been described as "definitely a must have for gore and horror comic fans…an amazing original series...”, and “What Lia Scott Price is doing from an indie level is incredible..."and "The story by Lia Scott Price is very gory…. Vampire lovers, I assure you, it’s something you’ve never seen before."

Price "has managed to turn vampires back into what they are truly meant to be, sadistic, violent and thirsty for blood....She has given us something to be afraid of."

Lia Scott Price had also been described in Horror Society's Scream Queens Wrap Up 2011 as "a different kind of scream queen. She gives you something to scream about."

Price's film adaptations have been quoted as one that "breathes a breath of fresh air into the vampire genre." Price is "catering to vampire purists" and is bringing back the more bloodthirsty, violent, and gory Vampire, as her Vampire Comic Book series has been described as one that "has a promise for a brand new horror element. It gives us a good reason to be afraid of vampires."

Price's atheist views are a prominent theme and influence in her work. She questions a Guardian Angel’s role of simply existing to protect and help humans. She presents that alternate view that the Guardian Angels humans pray to are evil, really tired of human whining and prayers and are flawed and vengeful. Price wanted to create something disturbing from something so innocent and supposedly protective."

"Price's works explore the alternate and controversial view of guardian angels as harmful, vengeful, and possibly negative entities. "We really don't know who or what it is we are praying to. It could be a negative entity disguised as a guardian angel with the intent to harm instead of help us.", says Price. In interviews Price has stated that "she questions people's belief in a supernatural, supposedly higher power", and that people don't know what a Guardian Angel really is. Price was inspired mainly by questioning popular beliefs: "Why do we rely on a supposedly higher supernatural power that we can’t see to save us, and what if it really was evil?" Price mentioned that "Since horror is a genre that pushes the envelope in a lot of aspects, I’d say I’ve been messing with people’s beliefs in terms of what pop culture considers “saviors”, mainly Guardian Angels. My work questions what they are, and presents an alternate view on what they could be."

As for the reactions to her works, Price says "People have been overwhelmingly supportive because I think they want to see a unique, fresh take on the vampire image and welcome something entirely new and original. And they also want to see the a classic, vicious, scary vampire, the kind that strikes fear and makes us afraid of vampires again."

Price says "Horror is about stretching the imagination. I'm sure it's rather disturbing to some people to see a guardian angel become a serial killer and a vampire, especially if I'm writing about something that kills you when you pray. I'm not out to shock and offend. I'm exploring an alternate view to things we put our blind faith in. Just because I'm messing with the pop-culture image of a guardian angel doesn't mean I'm condemning it or being disrespectful. I'm questioning why we rely so much on a supernatural entity to save us. It's an alternate view to something supernatural. We put so much blind faith in a higher power to help us and we don't even know what it is we are summoning. That's the whole point of my books and films. Angelic rebellion is nothing new, but I've just taken it to another, more psychotic level."

The reaction by fans, Price says, “has ranged from fascination to enthusiasm that I feature a vampire that’s new, different, evil and brutal, and that it’s refreshing to see something original.”

Price's Vampire Guardian AngelsTM are a unique new breed of Vampire. They are a more powerful breed, a cross between a supernatural and a holy being, a hybrid. Unlike traditional vampires, they are invincible to everything that would have affected traditional vampires such as holy water, sunlight, stakes to the heart, or crucifixes. Religious objects and holy places have no repelling effect on them. However, Price's Vampire Guardian Angels can only be killed by another Guardian Angel that has "turned back to good". For the most part they also avoid biting necks, choosing instead to slice open necks and arteries with a variety of sharp weapons they carry, since it involves less struggling and a speedy kill. Unlike traditional vampires, they don’t need fresh blood to survive: they can eat entire body parts and drink blood and fluids from bodies that have been dead for some time.

Price's characters were born from religious questioning, which reveals the psychology behind the characters.“To think that we’ve always thought of our guardian angels as someone we could rely on to protect us from life’s evils and unpleasantness, only to find out that they’re all getting a little tired of all the pleading and complaining...."They are disillusioned and angry Guardian Angels who rebel against their traditional and expected role as protectors of humans by killing, and encouraging humans to suicide. Instead of answering prayers, they kill humans to shut them up for good because they are sick and tired of answering prayers that they "snap". Because they are still Guardian Angels, they are actually drawn to prayers, and thus it turns them into serial killers. They can only attack humans who specifically pray to them for help, who are suicidal, or in despair.

Price began producing film shorts and features in 2005 through her production company Lia Scott Price Productions, using film as a promotional tool to promote her characters and stories. The films were based entirely on adaptations from her trilogy novel and its characters. Her first vampire feature film "Dominion" was released in 2006 and included a short introductory scene contributed by actor Rainn Wilson, a fan and early supporter of her work (Thank you Mr. Wilson!). Wilson sent a message of support that appears on Price's web site: "Early on in my career I did a short, low budget film for Lia Scott Price called "Dominion". Several of my actor friends had worked with her before and I was a fan of her dark, funny, horror writing. Artists like Lia, working with super-low budgets, out of the mainstream, need to be supported. She's got a singular, sick vision and is a hell of a lot of fun. (No pun intended) I urge you to check out her stuff!"

The same year, Price went on to produce and act in "The Guardian" (2006), another adaptation of her trilogy novel and Serial Killer Guardian Angel characters, but without the vampire element, focusing more instead on the serial killer aspect of the first story in the novel. As the prequel story in the trilogy, it was the only non-vampire film she produced based on the novel. She later produced three vampire film shorts that were based on adaptations of scenes and her characters from the novel: "The Serial Killer & Vampire Guardian Angel Diaries" (2010), "Scenes from a Novel" (2011), and "PRA/EY" (2012), another film short which she starred in. Price also acts in, directs, edits, and is a cinematographer for her films.

Price's writing is a mix of gothic horror, supernatural/vampire, bloody brutal slasher and action-suspense thriller. This results in a trilogy novel (and a comic book series) that is gory, disturbing, and explicit.

In Book 1 of her trilogy novel, Price begins the story with the traditional action-thriller format, but adds "gothic-type" settings with some old churches, cemeteries, and turning urban scenarios into rainy, gloomy environments.

Book 2 includes a more horror-type, dark setting and a theme of angels rebelling from the extremes and fanatical beliefs of Catholicism and against their own traditional protector roles.. Their main purpose is to  destroy humans, because they are "God's so-called favorites". In Book 2, Price turns these pop-culture sacred icons into lustful, seductive, psychopathic, sociopathic, angry, jealous, traumatized, and resentful Vampires who pillage and murder, engage in forbidden liaisons with humans and lonely, abandoned, suffering doomed heroines, and who crave power.

In Book 3, there is an influence of slasher and action-thriller, martial arts and even anime in terms of the character design, as well as an anti-fanatical religious establishment element. Price's characters continue to harbor extreme hatred towards overly-fanatical religious humans and clergy. They are sick of being bound by what they believe is a guilt-ridden, fear, self-sacrifice and punishment-based religion. They hate their roles of being forced to serve a race of weak, begging, whining, institutionalized, "easily-brainwashed and force-fed by religion" humans who rely too much on the supernatural to save them, and angered by the fact that they are still bound by some rules of Heaven such as having to answer prayers because of the nature of what they are, Guardian Angels, and in some instances, still torn between their role as good protector and their transformation into evil, powerful vampires with more free will.

As an added element of mystery bonus, the endings, and sequels, have unexpected twists.

Special thanks to writers:
Michael DeFellipo of Horror Society
John Rizo of horrornews.net
And to all the writers, bloggers and media. Much appreciated!

Scenes from a Novel (2011) (Producer/Director/Cinematographer)

-Geeks on the Mic Podcast: Interview with Lia Scott Price

-PRA/EY to screen at Philly Loves Women in Horror

-Lia Scott Price putting down the pen, picking up a camera

SCENES FROM A NOVEL FILM:

-IMDB: Scenes from a Novel (The Guardian, Revenant and Dominion Film Shorts)