Vampire Guardian Angels is a creator-owned, independent and original comic book series created and written by Lia Scott Price. Enter a disturbing world where Guardian Angels have become vicious vampires and serial killers who hunt down humans who pray to them, who crave power and seek to enslave all humans and "earth" vampires. As these evil "Vampire Guardian Angels" begin to form armies and fight over a "creator" who holds the power of regeneration and the healing of angels, only one "good" angel remains to fight them, and both humans and "earth" vampires must also try to work together to stop them.


All Lia Scott Price Comic Books and Images are copyrighted and Trademarked.
Comic Book Images may not be used without specific written permission
from the publisher/copyright holder.


How to Buy: See links below. 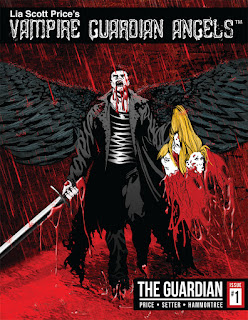 The first issue in the series "The Guardian" introduces the transformation of Guardian Angels into Vampires. This is the prequel where Guardian Angels are first introduced as Serial Killers and have not yet become Vampires. An angry Gabriel, sick of answering prayers and protecting humans, targets and kills them. His killing spree is stopped by another Guardian Angel, Cameron, and a young boy, Joseph, who has a mysterious power that kills Gabriel. Gabriel ascends and resurrects back in Heaven, but a Vampire hitchhikes, bites him, invades Heaven, and turns all Guardian Angels into sadistic, invincible Vampires. The vampiric infection spreads and, realizing their newfound power and freedom, the Vampire Guardian Angels are hell bent on seeking revenge against mankind. 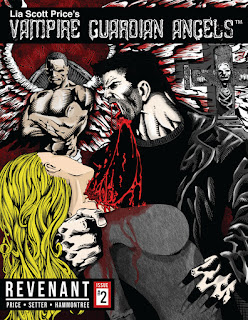 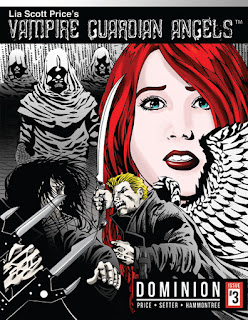 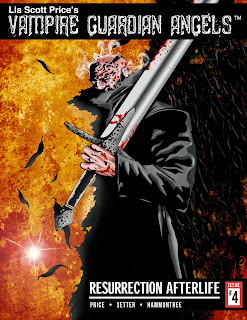 In the fourth issue, Resurrection: Afterlife, a resurrected but horribly disfigured Gabriel seeks revenge on Joseph, the little boy whose mysterious power sent him back to Heaven. Flashbacks tell the story of how Cameron accidentally killed Joseph's mother and how Joseph was bitten by Cameron and is not yet aware that he is a Vampire. A guilt-ridden Cameron and his former detective partner, Kirkland, work to protect a now-adult Joseph from Gabriel. 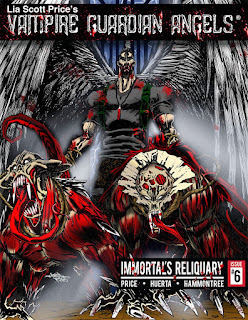 In the sixth issue, "Immortal's Reliquary", Gabriel is alive and being healed by Prince Jeromos in Sweden, who plots to unseat Janos from power. Jeromos has kidnapped the Author, Ms. Price, as her blood is needed to heal Gabriel.  Cameron and Costa work to stop Jeromos, who claims the Author as his Queen, and they must fight Gabriel in an attempt to rescue her.

Sneak Peek at the pages

ISSUE 7,  8,  9, 10 and all future issues
are now subscription-based webcomics 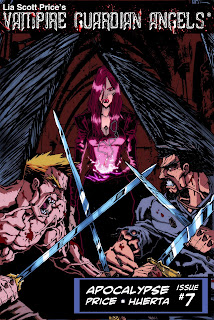 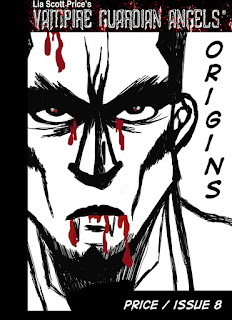 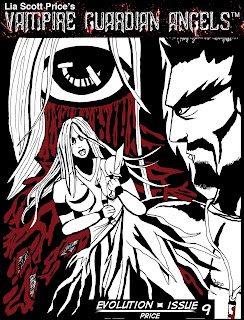 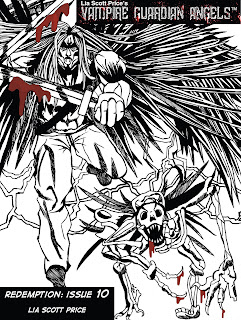 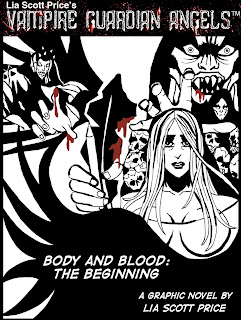 
Vampire Guardian Angels: Apocalypse, Issue 7
Cover Artist: Andrew Huerta. Creator/Artist/Writer: Lia Scott Price
"Apocalypse" focuses on the coming brutal bloody war for power between the Vampire Guardian Angels, humans, and earth vampires, and why they are specifically after the author, Ms. Price, as they fight among themselves and build their armies. Whoever possesses the "Creator and Healer" - who happens to be Ms. Price - the "most powerful of all relics", and is of royal blood or marries into royal blood, will become full ruler of all, with Ms. Price as his Queen. It's army vs army, with humans and vampires either bred or eaten, and the author caught in between.

Vampire Guardian Angels: Origins, Issue 8
Creator/Artist/Writer: Lia Scott Price
"Origins" explores the backgrounds of each character from the comic book series and primarily focuses on Gabriel, the serial-killing guardian angel who turned all the guardian angels into vampires, and his ties to the other characters.

Vampire Guardian Angels: Redemption, Issue 10
Creator/Artist/Writer: Lia Scott Price
The former King Janos, now insane, continues his destruction of cities. In the aftermath of the battle between the Vampire Guardian Angel armies, the Queen and the remaining Angels must band together against him. They are also pursued by the remaining human survivors of the Church who clash between believers and non-believers. The Angels must decide whether they want to join Janos and continue being evil, or compromise and save humans and the Earth Vampires, their only food source, and strike a peace bargain with all the remaining survivors, as they fight to survive against the seemingly indestructible former king of the Vampire Guardian Angels.