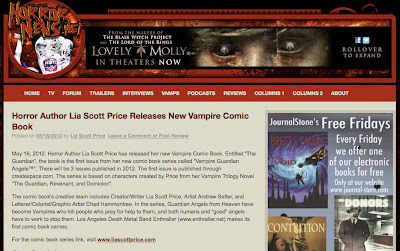 Thank you to horrornews.net for their support of horror writers, artists, and filmmakers!

Horror Author Lia Scott Price has released the first issue from her new Vampire Comic Series "Vampire Guardian Angels™". Entitled "The Guardian", the book is the first issue from her new comic book series called "Vampire Guardian Angels™". There will be 3 issues published in 2012. The series is based on characters created by Price from her Vampire Trilogy Novel "The Guardian, Revenant, and Dominion". In the series, Guardian Angels from Heaven have become Vampires who kill people who pray for help to them, and both humans and “good” angels have to work to stop them. The comic book's creative team includes Creator/Writer Lia Scott Price, Artist Andrew Setter, and Letterer/Colorist/Graphic Artist Chad Hammontree.