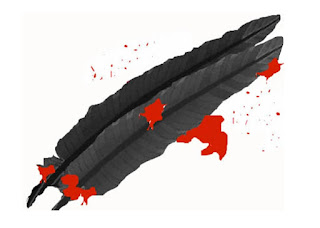 THIS IS THE ORIGINAL TRILOGY NOVEL THAT
THE COMIC BOOKS AND GRAPHIC NOVELS
ARE BASED ON.

Note: This is not the comic book.
This is the full-length paperback novel. 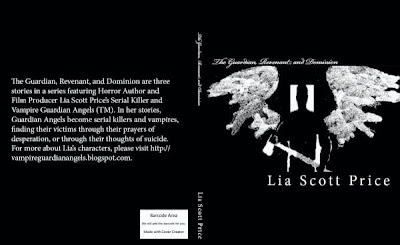 This Vampire Book Contains R-Rated, Explicit Material. Over 18 only.

Warning: If you believe in Guardian Angels, you may be creeped out by the image of Guardian Angels that Lia Scott Price presents.  It's too disturbing for the mainstream to accept that a pop culture icon such as a Guardian Angel can be anything else but good. Lia Scott Price's works give an alternate view on why we should not rely on a supernatural, higher power to always save us. This is a fictional story in a what-if world, where Guardian Angels are capable of doing everything you thought they would never do.


Lia Scott Price's "The Guardian, Revenant, and Dominion" is a Vampire Trilogy Book consisting of 3 continuous stories featuring her Serial Killer and Vampire Guardian Angels. This is the book Lia turns into a comic book series and the original trilogy novel that the comic books are based on.

Note: This is not the comic book. This is the full-length paperback novel.   There are 3 stories in the trilogy novel. (“The Guardian”, (prequel)  “Revenant”, and “Dominion”) that started the comic book series (the novel was turned into a comic book using the first three stories). The rest of the trilogy novel sequels are now in comic book format: (sequels) “Resurrection: Afterlife”, “Rule of Blood”, and “Immortal's Reliquary”.

The Guardian, Book 1: THE BEGINNING. A Disillusioned Guardian Angel Becomes a Serial Killer.

Set in Los Angeles, CA, The Guardian is the first story in the series. Guardian Angels first become Serial Killer Guardian AngelsTM and are not yet Vampires. The Guardian Angel Gabriel hates his job of answering people's prayers but can't get out of it, but he finds a way to rebel.  He's desperate to stop people's prayers because he's sick of their whining, and he can't keep up with so many prayers, so he becomes a Serial Killer. He targets only those who are despairing and suicidal and who pray specifically for help to a Guardian Angel, because they are easy victims to kill. He hates that fact that people rely on and expect a higher power to save them. But he can only kill people by hypnotic suggestion and mind control. He can't kill them himself since he is still bound to protect and serve, but he can convince them to kill themselves and make it look like a suicide or an accident, and to put the blame on the victim. Gabriel reasons that he is removing the weak and the "undesirables" from the population. Gabriel first targets the clergy because of his growing hatred of them. Then he moves onto attacking people. Gabriel attacks a young woman, Christina, in a church but a priest saves her. Christina reports the incident to a Los Angeles Detective, Kirkland. Detective Kirkland is assigned a new partner, Cameron, who is an undercover Guardian Angel sent to stop Gabriel. Cameron tries to convince Kirkland who Gabriel is and how to stop him. Cameron tells Kirkland that the only thing that can kill a bad Guardian is a Guardian that is good, or who has turned back to good. Christina falls in love with Cameron, and becomes a target for Gabriel's vengeance. Gabriel goes after Christina's young son, Joseph, who prayed to a Guardian Angel, but Christina and Joseph are protected by Cameron. Cameron confronts and fights Gabriel, who retreats. Gabriel in the meantime is having flashbacks which reveals the motive for his killings. As a young boy, he was sent by the Church on a crusade and sacrificed as a child soldier. He had called for his Guardian Angel and for God to save him, but he was killed instead, and he became a Guardian Angel, and has resented the role of being forced to save humans ever since, when he himself had been allowed to die. Gabriel kills a prayer group, and goes after Joseph again, killing his babysitter, and holds Christina hostage. But when Christina breaks free, Gabriel lures Joseph to him, but discovers that Joseph somehow has the power to telepathically communicate with Gabriel. Joseph's mysterious power causes Gabriel to die a fiery death, and is Gabriel is turned back into a child angel. Gabriel ascends back into Heaven. 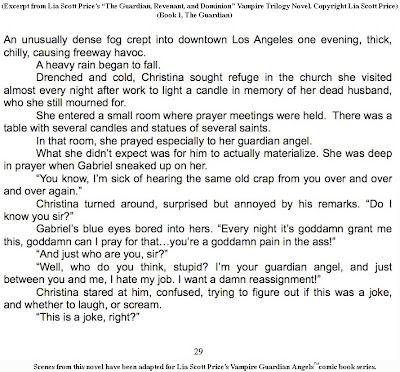 The second story in the series is set in New York,  and is the sequel to The Guardian Book 1. In this book, Guardian Angels become Vampire Guardian AngelsTM. The Guardian Angel Gabriel, who was killed in Book 1, reincarnated as a child angel and ascended back to Heaven. However, an Earth Vampire, seeing a chance to infiltrate Heaven, latched on to Gabriel and ascended with him. The Vampire proceeded to attack all the inhabitants of Heaven and turned all Guardian Angels into Vampires. One such Guardian-Angel-Turned Vampire was Gregory, who stalks a student, Janos. Janos hears voices crying out for help wherever he goes, and suffers from insomnia. He thinks he is going crazy. Gregory soon reveals to Janos that long before a Vampire invaded Heaven and turned Heaven's Guardian Angels into Vampires, Vampire Guardian Angels already existed on Earth. They were Guardian Angels working among humans who were bitten by Earth Vampires. Their existence was hidden in symbolic passages in the Bible that implied Angels were killing and drinking blood. Those were the first Vampire Guardian Angels who, while on Earth, were worshiped as Gods and given the name "Angels" and who were hidden and fed by the Church, using victims taken by the Inquisition. They could not return to Heaven so they remained on Earth, and all the Guardian Angels left in heaven were still good and not yet Vampires prior to Gabriel's ascension. Gregory reveals further that he is one of those Vampire Guardian Angels from biblical times, and that he fathered Janos through a bloodthirsty ancient Countess, Elizabeth Bathory. Janos was born a stillborn many centuries ago but was reincarnated into modern times. Gregory insists that Janos was created to become the chosen leader and gatekeeper who must open a portal to let in the new race of Vampire Guardian Angels from Heaven to take over mankind.  Gregory tells Janos that the voices he hears are people's prayers of despair, and that Janos is actually not only a Guardian Angel himself, but also a Vampire. Janos unknowingly follows the voices like a beacon, kills and feeds off the victim, in a sort of sleep-state, but does not remember anything. He often leaves the victims still alive, but Gregory, always following him, finishes them off and hides the bodies, sometimes making it look like a suicide or an accident to throw off any suspicions (The M.O. of a Serial Killer and Vampire Guardian Angel). Janos learns that Vampire Guardian Angels now have loyal followers, the Earth Vampires, who are eagerly awaiting their arrival and the takeover of humans who they plan to use for food. This new breed of Guardian Angel-turned-Vampire can now touch and kill their victims in addition to mind control, seduce, and kill their female victims,  are seemingly invincible, and have promised to provide food and riches to the Earth Vampires if they work for them. Janos, however, starts to rebel, repulsed by who he is and  what he has done and by what the Angels plan to do. Janos also becomes increasingly alienated from his girlfriend Leah. So Gregory kidnaps Leah as a backup plan and takes her, with the intentions of forcing her to produce another "leader" in case Janos continues to rebel. Gregory tries to kill Janos, but two New York detectives intervene and shoot Gregory, and Gregory disappears after falling off the Brooklyn Bridge. The twist in the ending opens up the novel for the third book in the series. 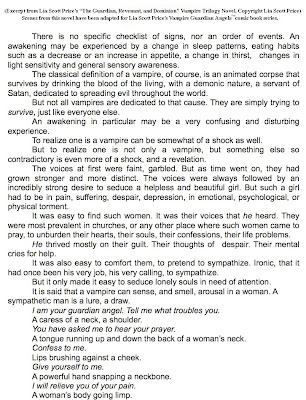 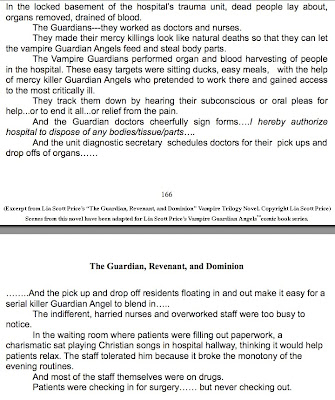 Original Novel (Purchase Hard Copy and Downloads)
WARNING-SPOILER ALERT!: This book contains full synopsis of all three stories in the introduction. Over 18 only!

A very special thank you to all my wonderful friends and fans, I'm truly honored to receive your feedback, posts, and responses and I am grateful for everyone's support! Thanks again! You all rock!